And before that, he sold gourmet hamburgers

Taking The Robin Out Of Red Robin | Bleeding Cool
As of the upcoming Teen Titans #0, Tim Drake, the kid who was Robin from 1989 to 2009, in the second half of the Batman animated series, and in the currently running "Young Justice" television series... was never Robin at all. Which isn't to say that all of his history just vanished, but that his adventures as Batman's partner now all occurred under the name "Red Robin".

And actually, that's not the part that confuses me. Even though I guess now all the Stephanie Brown fans can sarcastically reply, "We feel your pain." Now all the Stephanie-was-never-really-Robin talk makes sense, since she was replacing a guy who was never really Robin either. Yeah, that solves everyone's problems.

The part that bothers me is that as of his first appearance post-New 52, less than a year ago, when every DC title was restarted in an is-it-or-ain't-it soft reboot, he was still a former Robin.

Note to DC Comics: It's not multiple earths and heroic legacies that confuses readers, it's crap like this.

(Just in case you don't get the gourmet hamburger thing.)
Posted by Daniel at 10:38 PM No comments:

Well, if DC was trying to upstage Marvel's upcoming Northstar nuptials, they did it. Now everyone's wondering who it will be.

Some are sniping at Fox News for having used the phrase "a gay Superman", replying "Of course, it's not going to be Superman." I'm not able to think of any reason why Superman would be off the table. Since the New 52 reboot, his relationship with Lois Lane has been deleted, and with it any sexual identity at all. I do recall a semi-official statement from Grant Morrison that the New 52 Superman is not able to breed with human women--but the exact reason why this might be true is open to interpretation. It's a valid alternative reason for his steadfast refusal to marry Lois all those years.

The initial interpretation of Didio's comment is that a familiar character not yet reintroduced in the New 52 will be gay. But Courtney Simmons' phrasing implies that the victim test subject character may already have been seen, just not specifically identified as gay.

I find myself longing for the good old days when comic book characters didn't have sex. That meant if it was important to you that your favorite character be gay, well, he might have been: There was no evidence to the contrary.

If we're going to play the guessing game, I don't think we can attach too much importance to Simmons' description of the character as "iconic". This is DC Marketing talking here: As far as they're concerned, they're all iconic. It could be Alfred, Zatara, or Charley "Golden Eagle" Parker. Or pretty much anybody or everybody on Earth 2.

If they are playing fair with "iconic", though, I vote for Barry Allen. The new original Silver Age Flash is badly in need of some defining characteristics, and gayness might just be the shot in the arm he needs to become an icon for the twenty-tens.

OOPS:  Apparently Scott Snyder has confirmed that it's a character we have not yet seen in the New 52. Which narrows the field quite a bit, if they are playing fair with "iconic". The most likely bet, then, is someone in Earth 2 (Flash or Green Lantern).
Posted by Daniel at 11:15 AM 1 comment:

She Has No Head! – Dear Marvel: Please Stop Ruining Everything | Comics Should Be Good! @ Comic Book Resources
In a chat afterwards, Joe told me that he’d love to make a tentpole [sic] movie with a female lead, but that he really doesn’t think there is an actress right now who could carry it, or a character that would work either.

Trivial issue: I don't get the "sic" on the phrase "tentpole movie". That's what they call a film they can build their summer release schedule around. The metaphor is that of a circus tent, with one big show and a collection of lesser attractions. Is "sic" what you say when you want to attempt a sexual entendre, but can't really think of one?

Main issue: Well, the reason I linked to Kelly Thompson's "She Has No Head!" and not the Ain't It Cool News remark that inspired it is that the smackdown has already been done. But I certainly didn't expect the Editor-in-Chief, head cheerleader and heir to Stan "the Man" Lee himself to go dissin' his own superbabes that way.

Perhaps this is the wrong time to point out that the "underwhelming" "Elektra" outgrossed either "Punisher" movie.

This is a production company that already has Scarlett Johansson (Iron Man 2, Avengers), Natalie Portman (Star Wars), Gwyneth Paltrow (won an Oscar for Shakespeare in Love), and Liv Tyler (Lord of the Rings) under contract. And Johansson is the first one they've used as anything other than a secretary.

Shall we also discuss Halle Berry, Anna Paquin, Jennifer Connelly, Jessica Alba and Cobie Smulders, all of whom seem to be able to carry other people's movies and shows?

Really, dude, you're just not trying.
Posted by Daniel at 4:23 PM 2 comments:

"And this is my rabbit Hoppy."

Hoppy the Marvel Bunny is back, but Ralph Dibny is still gone for apparent good?

The Return Of Vibe And Hoppy The Marvel Bunny To The New DCU | Bleeding Cool Comic Book, Movies and TV News and Rumors
Posted by Daniel at 4:30 PM No comments:

"This is an Imaginary Story... Aren't they all?"

Slay, Monstrobot of the Deep!!: Obviously, Too Much Alfredo Before Bedtime...
It's too bad that DC doesn't do Elsewhere stories anymore (unless, of course, you consider the whole nu52 an Elseworlds story...)

That would be wonderful news.

I've been thinking of it as Heroes Reborn Part II. You know, because it worked so well the first time. The same Usual Gang of Idiots were largely responsible for both.
Posted by Daniel at 11:38 AM No comments:

Under the Moons of Mars 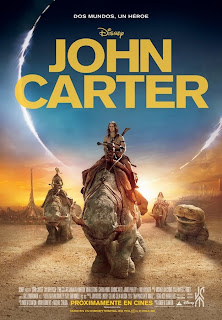 Not in the movie. "John Carter" may be the best film translation of an Edgar Rice Burroughs book ever. (But after nearly a century of "Me Tarzan, you Jane, me name son Boy because me cannot spell 'elephant'", I guess that's not saying a lot.) I've read the books, I've re-read them recently, and almost everything that's up there on the screen is in the books. Some of it isn't in the same order it is in the books, but it's there. And the little that is different improves on the books.

I loved "John Carter". I loved Woola rocketing around the Martian landscape. I loved the complexity of Sola, the Thark woman who "adopts" Carter. I loved Tars Tarkas Gibbs-slapping Carter on the back of the head. I loved "I told you he could jump!"

I loved that the first time we see Dejah Thoris, she's wearing the Barsoomian equivalent of a white lab coat, because she's a scientist. No, it isn't a white lab coat... but it is. It obviously is.

I loved Carter leaping to catch Dejah Thoris as she fell from a Martian flyer. I loved the Martian flyers! I loved the cruel Jeddak Tal Hajus, watching one gigantic white ape mop the floor with Carter,  boredly commanding, "Free the other one." I loved the "Oh, give me a break" expression on Carter's face when he sees the second ape.

More. Too much. I'm running on. I loved this movie. It was exactly what a John Carter of Mars movie should be.

So why am I disappointed? Because the assembled brain trust of movie critics determined, long before March 9, that this movie was a flop, a disappointment, a money sink of ishtaric proportions. And because that was the story they wanted to tell -- and because the mighty Disney marketing machine didn't have a clue how to sell this story -- that's the story it became. "A Princess of Mars", that's the name of the book, that should have been the name of the movie.

Go see this movie. If you think the critics might know better than me, save money and go to a cheap 2-D matinee. But go, while you still can.
Posted by Daniel at 12:29 AM No comments:


I'm really loving Comics Alliance's Point/Counterpoint on the new Justice League, even if I'm not sure which is which.


Point/Counterpoint: 'Justice League' Is Everything Wrong With Comics: "[Darkseid] does nothing but show up, say his name, and then trade punches until this stupid story runs out of pages."

Yep, that's about it.


Point/Counterpoint: 'Justice League' Shines with Strong Characters: "In the first arc of the comic, Batman, Green Lantern, Superman, Flash, Wonder Woman, Aquaman and Cyborg join together to fight an invasion from Apokolips, during which Darkseid shows up personally. Batman finds out from Steppenwolf and Desaad that Darkseid is looking for his daughter, who is apparently on Earth. And in terms of the overall plot of the arc... that's about everything that happens."

And that's your defense? That we're hip-deep in Character Revelation that has nothing to do with the story? Six issues of arc get a 50-word synopsis, and you're OK with that?

Although, actually, he got more out of it than I did. I totally missed the Darkseid's daughter thing (a thrown-away line of dialog dismissing a macguffin who's never seen or named).

Where's my copy of New Frontier? At least that takes more than five minutes to read.
Posted by Daniel at 12:00 PM 4 comments:

There's plenty of Batgirls, but only one Oracle

This is why you want to be very cautious when you go eliminating a character from continuity. You never know when someone is going to come along and do something really awesome with her that you didn't see coming.
Posted by Daniel at 4:43 PM 1 comment:

"We're not a team, and we're not friends either."

That was a conclusion? (Spoilers ahoy.)

They think they've destroyed all the local Mother Boxes, and that Darkseid therefore can't come back to earth for a long time. This makes about as much sense as Mr Mxyzptlk being tricked into saying his name backwards.

It reminds me of Jean-Luc Picard's first encounter with the Borg, which ends when Q decides he's bored and takes the Enterprise back out of Borg space -- where he put it in the first place.

The Justice League isn't calling itself the Justice League. They clearly don't want to travel together, until Batman points out that if they play nice with others, maybe it'll confuse the police enough that they will stop trying to arrest them.

And I haven't mentioned the art yet, which is so cluttered and detailed that I can't figure out what I'm looking at, or supposed to be looking at.

And Pandora is... oh, never mind. When she was a mystery, she was interesting. Now we've seen every seam on her costume, and we've seen her tattoos, and we know that she's Nu52's Uatu the Watcher, observing us but forbidden to act... Bored now.

Unsatisfying. We'll see if it grows on me. In the meantime, I'll wait hopefully for the real Justice League to come back from multiversal purgatory and kick these pretenders' asses. 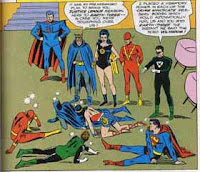 Heck, these guys will do.
Posted by Daniel at 1:27 AM No comments:

My all-time favorite sequence by the incomparable John Severin, from Mad #5, June-July 1953. From the lovely Nanuk the Canuk to Miltie the Mountie delivering his dying words as he hangs over the panel border, there was nothing Severin couldn't draw.
Posted by Daniel at 4:12 PM 1 comment:

Many images hosted by ImageShack.us.
Many cover images from the invaluable Grand Comic Book Database.

All other content belongs to its respective copyright holders.